Gone to the Dogs Cover Reveal!

I've got a brand-spanking-new cover for my upcoming Christian sweet romance debut novel, Gone to the Dogs, along with a blurb to let you know what it's all about. More than that, I've got six whole chapters ready for you to read right now! Click here to grab your free copy.

Without further ado, here's that cover! And keep scrolling to read the book's description. 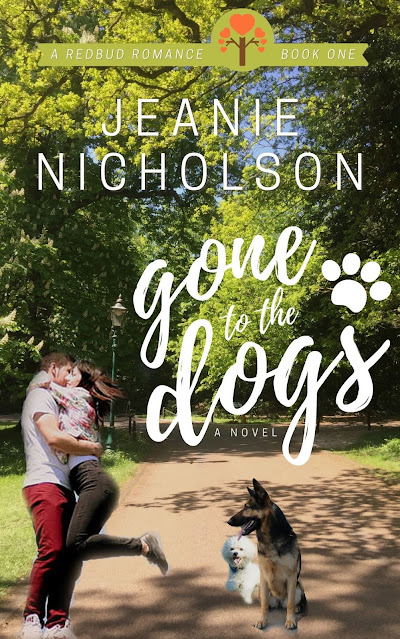 Reagan Dunn's life has gone to the dogs -- literally. Still recovering from a broken marriage that turned her life upside down, she searches for a new life on the road as a travelling pet sitter. When she takes a job in the little Oklahoma town of Redbud, the best she hopes for is a hot shower and a couple of nights sleeping in a real bed -- until she meets Josh, who is not only incredibly handsome, but also everything her ex-husband turned out not to be: kind, hard-working and loyal. Trouble is, he's also taken.

Josh Baker is all set to marry Deirdre Banks, the girl of his dreams -- that is, if she'll ever agree to setting a wedding date. But his fiancee's cold feet are the least of Josh's problems when she leaves town and hires a pet sitter to watch her bichon frise. Reagan is not only beautiful, but vulnerable in a way that tugs at all of Josh's protective instincts, and the connection between them is undeniable, making Josh question whether his feet might be getting a little chilly, as well.

Drawn into the lives of Josh and his extended family despite her best intentions, Reagan finds a sense of belonging she thought she'd lost forever. But she also gets a look at Deirdre's true colors, which look more and more like those of her emotionally abusive ex. She can't stand by and watch him make the same mistakes she made, but does she even have the right to speak up? And if she did, would he even listen?

Josh is determined to honor his commitment to Deirdre, despite the growing bond he feels with Reagan. But as the tension increases between him and his fiancee, so do his doubts. Are his perceptions colored by the sparks he feels with Reagan? And when she comes to him to confirm his deepest fears, can he trust this woman with a shadowed past who couldn't even hold her own marriage together? Can he even trust himself?

Both Reagan and Josh are intent on doing the right thing, if they can figure out what that is. But will the right thing mean destroying any chance either of them has at happiness--and will Reagan have to leave Josh, and Redbud, behind forever?

Celebrating Fall - The Most Wonderful Time of the Year!

As far as I'm concerned, THIS is the most wonderful time of the year. When it comes to fall, I'm a walking cliche. I love boots and scarves and flannel. I love Halloween and October and that Anne of Green Gables quote. And I love pumpkins and all the pumpkin-flavored things. Here's a quick list of all the pumpkiny goodness I look forward to each and every fall (you'll notice PSL is not on this list):

And just in case you were confused about how I really feel about fall, and October in particular, here's a poem I wrote about it a while back:

O month of months, in you I most delight.
No day of birth, nor remembrance day to mark,
Just that Eve of Saints, carved pumpkins set alight,
Costumed kids parading through the dark.
What fun! But not the only reason
October is blessed of all the seasons.

With a steaming mug and gladness in my heart
I welcome you, October, to this place.
Thirty-one days until you must depart
To make way for times of thankfulness and grace.
Winter, spring and summer I must bear
Till you make your way around again next year. 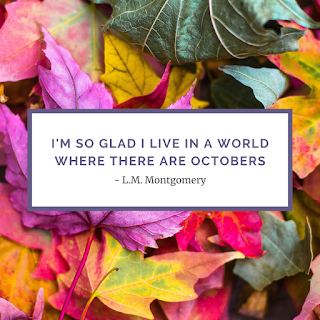 What are your feelings about fall? Do you love the sense of coziness it brings, or do you just dread the herald of winter? Do you have your own fall favs or do you scratch your head at all the pumpkin love? Sound off about fall in the comments!

Or you might not know me at all. Let's rectify that.

What's with all the names? Well, I was born in Tulsa, Oklahoma as Jean Marie Cousins, and switched to Bauhaus fourteen years ago when I married my husband, Matt. But for the most part, I've always gone by Jeanie outside of my professional life. Nicholson is my grandmother's maiden name, and it seemed like a good fit for a pen name when I decided to depart from my horror and urban fantasy roots and start writing sweet romance.

Around here, I'm just Jeanie, and this is my personal blog. If you've read my author blog, as a horror writer, you'd have seen some of the darker side of my personality--the part that gets a thrill from good scares and things that go bump in the night. Here, it's all about the lighter side--the side of me that loves rainbows and puppies and pumpkins and romance.

On this blog you'll likely find a lot about the things that matter most to me in life, like faith, home and family. And food. Lots of food. Expect to read a lot about my biggest passion--following Christ and studying the Word. You'll also likely find a lot about homesteading and prepping, books and knitting, doing life in the Arkansas Ozarks, and basically everything to do with the cozy, laid-back life of an introverted homebody who spends most of her time either taking in or putting out words all day.

If any or all of that sounds good to you, be sure to hit the Subscribe button to add my blog to your e-mail or RSS feed so you don't miss a post. And then grab your favorite cozy beverage and let's sit together a spell!